Cuba
Visited and written in 2003

Growing up in the USA we, as Americans, have the right to enjoy many freedoms including the right to travel, the right to speak our minds in a public forum without prejudice, and the right to open and run our own businesses. Oddly enough, one limitation to American freedom is that we may not travel to Cuba. Well, actually we are allowed to travel there but the Treasury Department has put restrictions on Americans spending money in Cuba because they believe that it slips through the hands of the people and ends up in the coffers of a government ruled by a Communist party. After just having spent eight days in Cuba, I can honestly say that I am a supporter of this policy, but for different reasons than that of the Treasury. 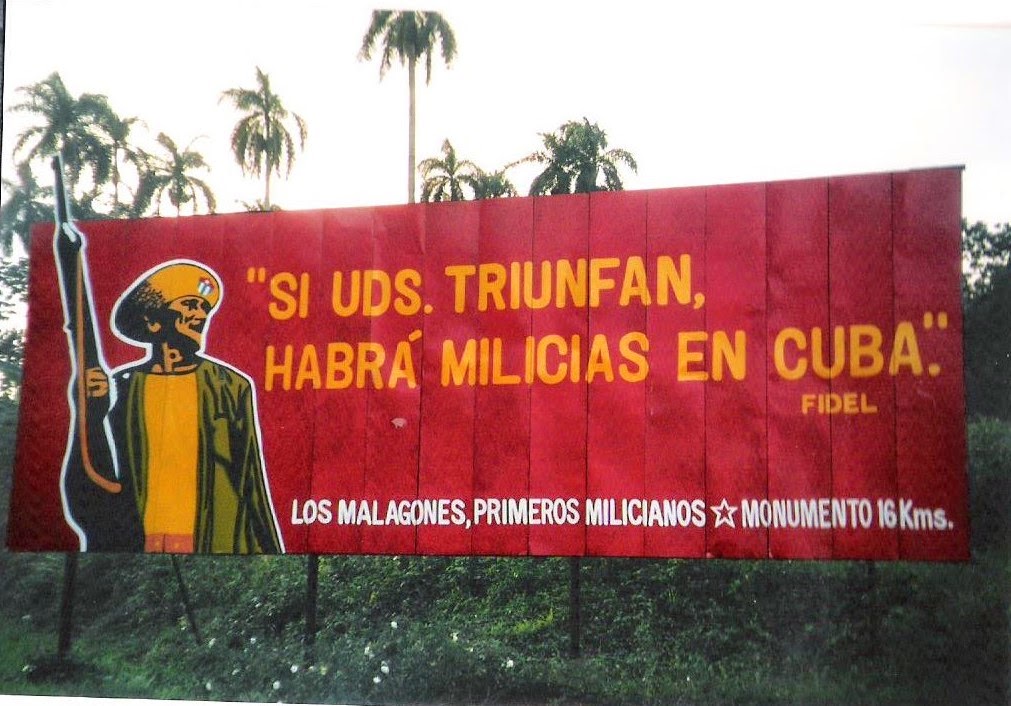 Cubans, on the other hand, do not have any of these rights listed above. The US media portrays Cuba as a country run by a terrible dictator who tortures and murders people who try to escape on tiny rafts to Florida. But according to some of the locals, the Cuban coast guard works in cooperation with the US coast guard to safely guide these "unseaworthy" vessels to the nearest port whether it be in the US or Cuba, in the best interest of the lives of the people. They further explained that if the attempted "escapees" are returned to Cuba, they are not tortured and beaten, they are not even put in jail, in fact they are even guaranteed to have their old job waiting for them upon return! It is actually a written law that employers are not allowed to fire employees who try to leave the country.


Black-outs and sudden down pours are both quite common in Cuba. Waking up one morning to a bright sunny day, Frank and I slipped into our bathing suits and headed out to the hotel pool, just as we are about to jump in, it starts raining. Oh, well, we were going to get wet anyway.


But let me start from the beginning. After 19 hours of travel we arrived at our hotel in Havana at 11pm local time (ie 5am in Germany) and were accompanied by only one of the two pieces of luggage that we left Munich with. Sad to say, the missing bag was full of "old" clothes, baseball hats, soap and pens that we intended to give away during the trip. It also contained our shoes. So, for the first two days we ran around Havana in 30°C heat with our nice warm shoes that we traveled in from 5°C Germany. Due to jet lag, we were up and out touring the city at 6am in the dark. Funny thing was, the streets were packed. It was a Saturday, there were no stores open, there were few buses running, people were just out and about. We saw the sun rise over Le Capitol and watched the city come to life. Later on, we were given a tour of the city by a Cuban girl whose father was a local rep for a German tour company. She knew everyone and brought us into all the "nooks and crannies' of the city including local restaurants, Hemingway's old hot spots, art galleries, churches, a brewery and a military fortress. 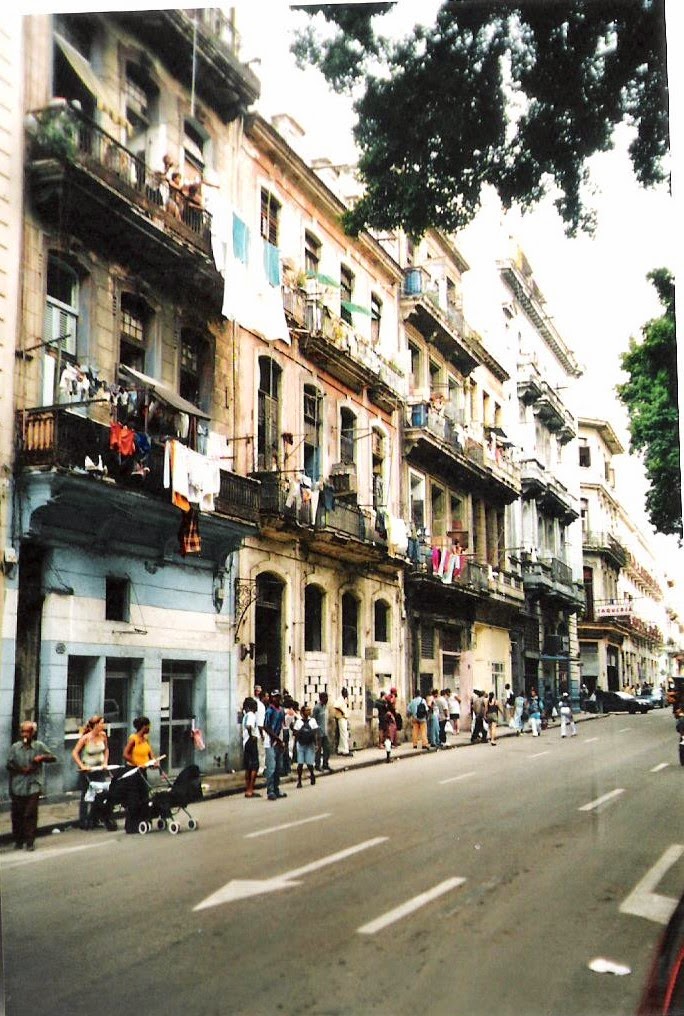 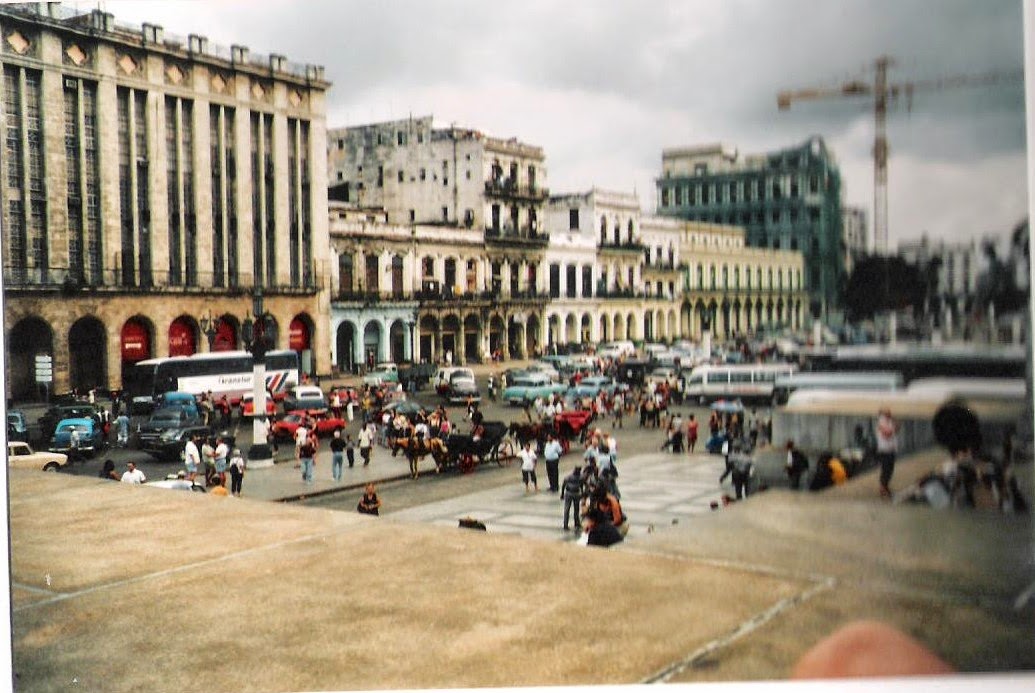 Let me digress for a minute to help you picture the city of Havana, if you are thinking "quaint", then wipe the slate clean, because that couldn't be further from the truth. The city is dirty, the buildings are decrepit and deteriorated, the only place to shop is in the hotel lobby souvenir boutique, and the restaurants serve the very basics-- rice and beans with only salt as a seasoning, roasted chicken or maybe a day-old lobster if you're lucky. Why? Because it's a communist country, if that doesn't answer the question for you, keep reading. After 36 hours in Havana, we picked up our pre-booked rental car (which involved a dozen phone calls, four languages, and extra cash just to get it) and headed towards the Valley of Vinales, a.k.a. home of the cigars. We "reserved" a Jeep, we got a compact Toyota. Cuban roads are not good, the pot-holes act as speed bumps and you are lucky to have a paved road. The highways are wide enough for about two lanes but there are no paint markings whatsoever. Basic rule of the road: you simply weave in and out of the bikes, hitch-hikers, horse drawn carts, dump trucks serving as buses, and the old-timers (reference to the cars, not age) and drive at whatever speed your vehicle is capable. There are very few street signs so you have to count the mileage (kilometer'age') to know which exit to take. The landscape of Vinales is breathtaking, there are mountains covered in both pine and palm trees, the vegetation is lush due to the frequent rains and absolutely idyllic for growing tobacco, thus providing the perfect blend of soil, rain, and sun to create the most exquisite cigars in the world. We went horseback riding through the valley on our first morning there. This was offered through our hotel, but again, Cuba has it's own style....we were met in our hotel lobby by a man who was to bring us on the tour, or so we thought, he didn't speak a word of any other language besides Spanish and unfortunately Frank and my Spanish is pretty much limited to 'gracious' and 'dos cerveza, por favor'. So, the "guide" leads us into the hotel parking lot (which contains 3 cars and a tour bus) and gestures that we need to take him in our own car to the horse. Okay. So I offered him the front seat; we pile into the compact and head off. 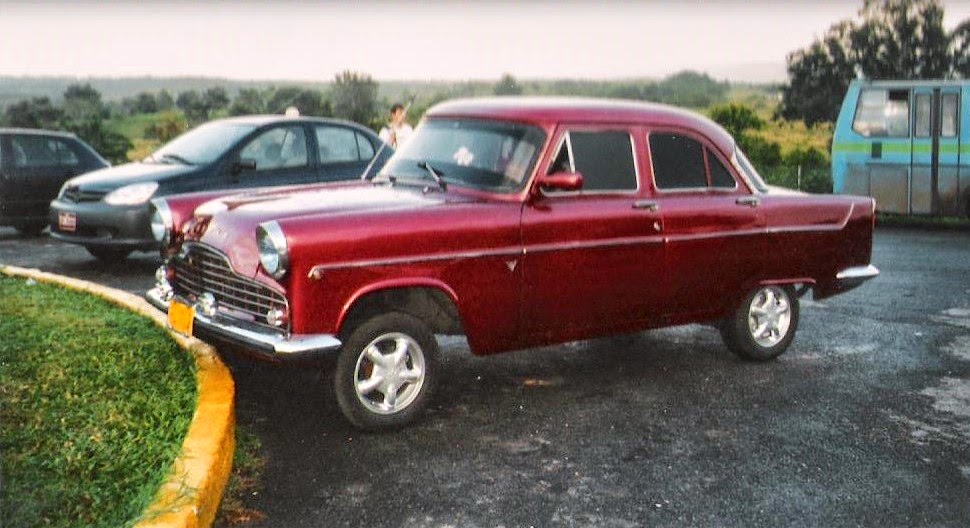 He leads us into the little village and then off onto a side street, then he motions for us to turn into a small dirt road which looked something like a driveway, but at the end was not a house but rather several offshoots of overgrown farm trails. So, at this point, I'm nervous. But he's from the hotel, right? We bump around for a few minutes and then when we reach a cluster of trees he asks us to pull off the road and park. At this point I'm looking around the back seat of the car for a weapon, with nothing in sight and only a tube of Chapstick in my pocket, I relinquish any hope of seeing my kids again. But alas, he then motions for Frank to honk the car horn several times and then we get out of the car. We hear commotion in the distance and see a horse through the trees. He then leads us into a small water basin where we have to cross a 20 foot wide river on a six inch wide felled tree laying across it. Off to one side sit a group of pigs playing in the mud, laughing at us. 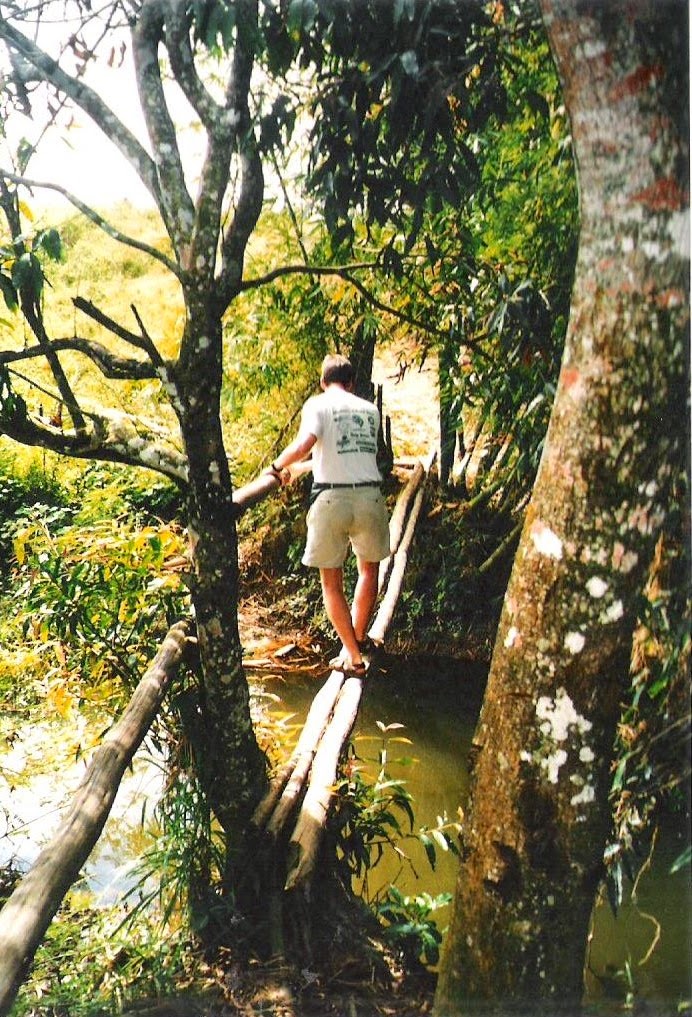 We make it across safely and are introduced to another man, a farmer, who has two un-saddled horses with him. Now, I'm thinking, poor Frank, he's from Berlin, he's never been on a horse and city boys are not the most animal friendly breed, so if we have to ride bare back, I am never going to be forgiven for this (i.e. the horse ride was my idea). We are then told to wait while the farmer rides off and comes back ten minutes later with two more horses and saddles, yea! We climb aboard and, after showing us how to turn and stop, he slaps the horse on the hind quarters and sends us off! The horses are running along with little concern about the riders and Frank and I are wondering if we are supposed to go this alone or is someone will catch up with us. 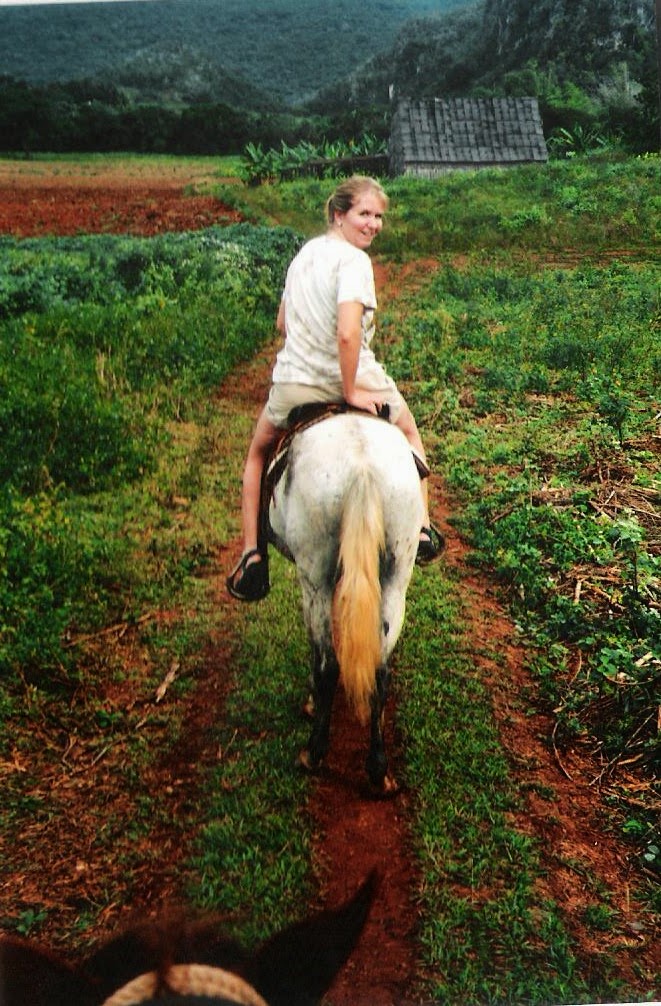 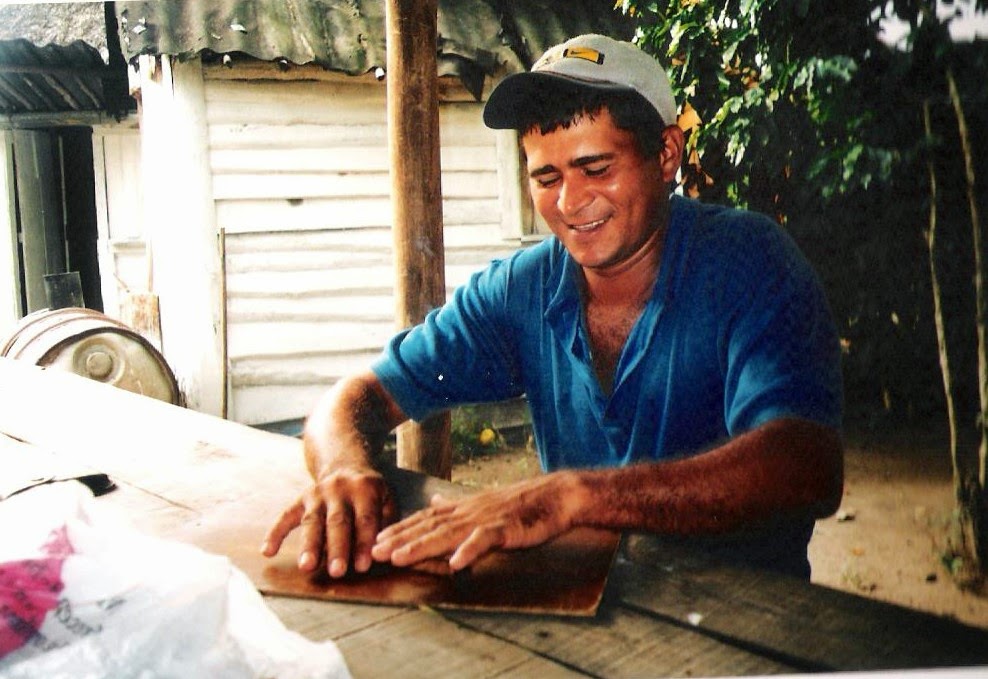 After a couple of days in Vinales we got on the road again and headed towards Trinidad (the city, not the island). At this point, I need to discuss public transportation. Busses are few and far between. The basic mode of transportation is the dump truck. We passed dozens of them filled to capacity with people standing up in them. They are on the highways and side roads. We learned that they are private individuals who do it to help out and don't charge a specific fee but ask people to pay what they can for the ride. We passed dozens of such trucks packed to capacity with sheets of plastic held over their heads to protect them from the sudden downpours. Although about 50% of the vehicles in Cuba are 1950's Ford's and Chryslers, most Cubans do not own an automobile. Hitch-hiking is an everyday occurrence for Cubans, from school children to grandmas. There are dozens waiting on every street corner and under highway overpasses. We finally decided to start giving some people a lift seeing that we had an empty back seat which would be much more comfortable than bouncing around in a dump truck. 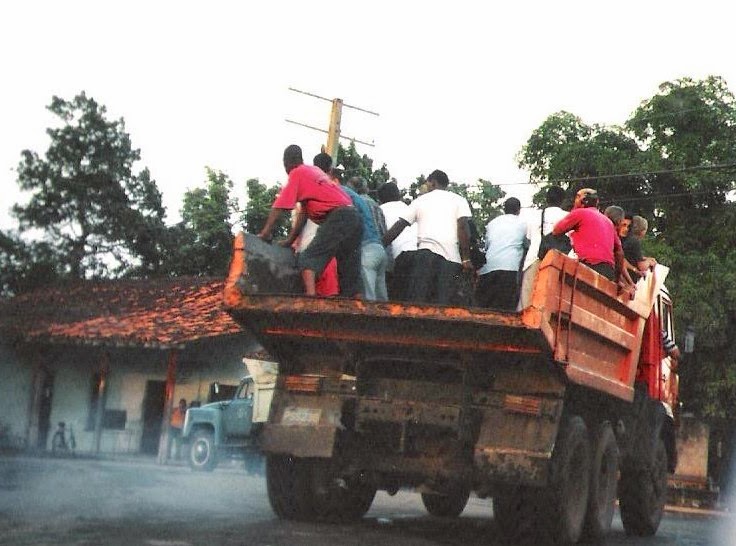 Among the notable passengers included a family of four, the mother was holding an infant in her arms with a small boy standing by her side, my heart broke and I told Frank, "Stop!" and then the woman called to her husband who joined them. They were all full of smiles and very thankful. The father put the little boy in the middle of the seat and he sat leaning forward mesmerized out the front window. To his delight, I turned on the window washer which he eagerly pointed out to his father. 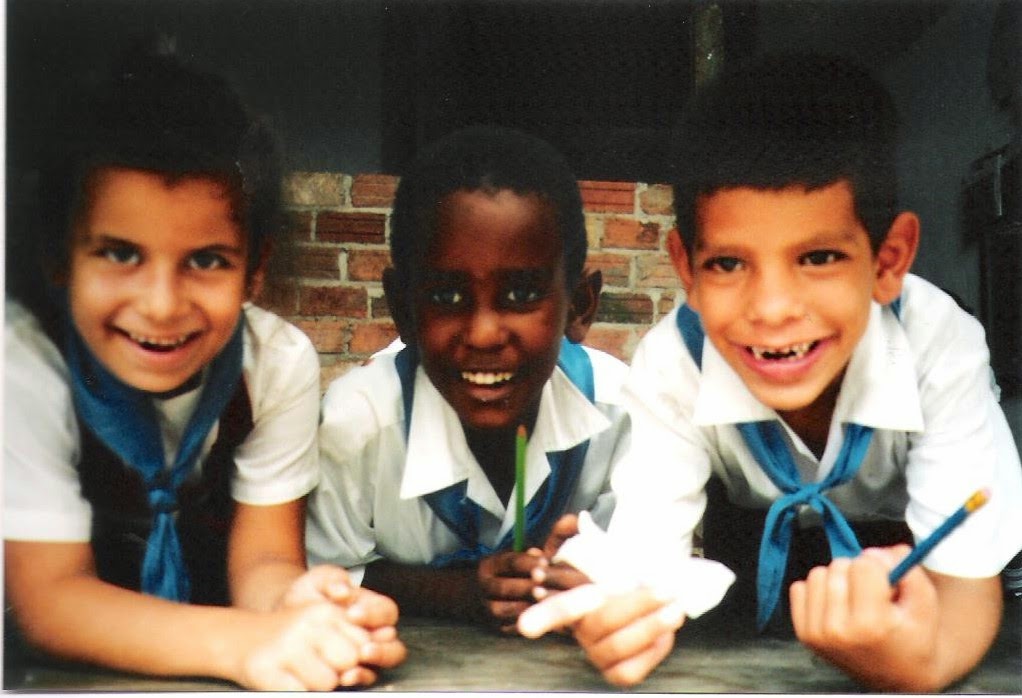 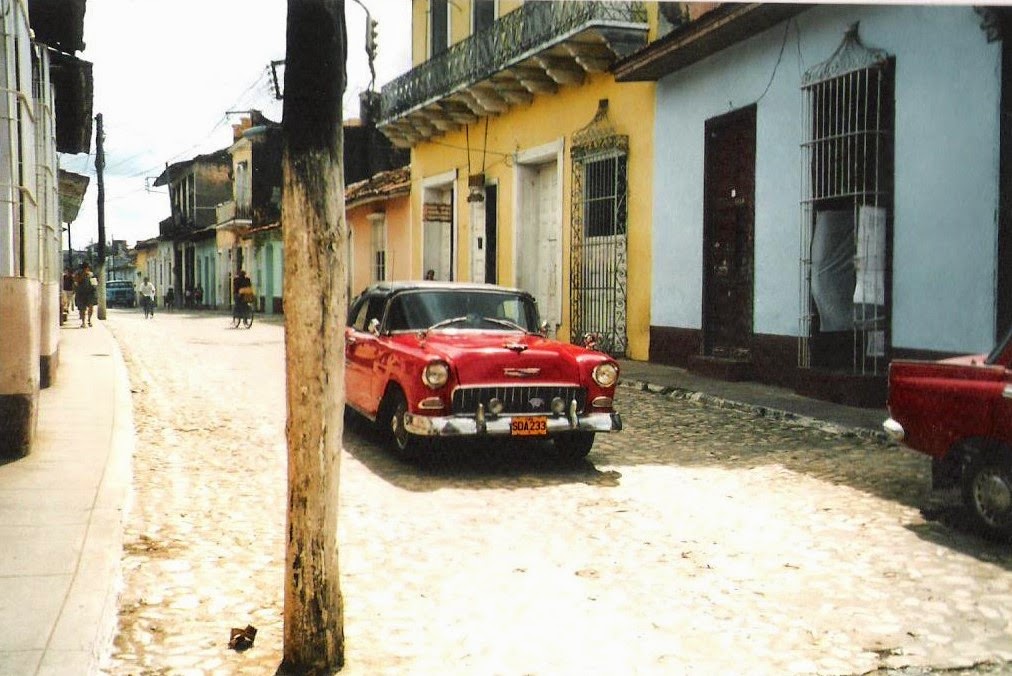 End of story.
The rest of the text has eerily disappeared.
Including all copies located in different drives on my computer.
Files sizes reduced to zero.
Mystery?
Posted by Holly Zimmermann at Tuesday, September 28, 2010

Email ThisBlogThis!Share to TwitterShare to FacebookShare to Pinterest
Labels: Travel