The opening sentence of the email read, “It is official, you are invited to run the 2022 Snowman Race Bhutan.”

The Snowman Race was conceived to be the toughest footrace in the world, covering over 200 kilometers in the Himalayan mountains, traversing passes of over 5400 meters (17,000 feet) above sea level, and nightly temperatures well below freezing. It was initiated by His Majesty the King of Bhutan to raise worldwide awareness to the conservation of natural and cultural heritage, including climate change impacts, particularly on the inhabitants in fragile mountain ecosystems. What many people may not know is that Bhutan is only one of three nations world-wide that is carbon negative. This means that they absorb more carbon dioxide than they emit. Even so, the glaciers that feed its rivers, irrigate agricultural lands, and power its hydropower plants, are melting rapidly. Landslides and flash floods are no longer uncommon, leaving the Bhutanese highlanders constantly at risk of losing their livelihoods and their lives.

The race was by invitation only, extended to 22 international and 8 Bhutanese athletes. The athletes chosen included some of the best endurance trail runners in the world. Why were trail runners chosen to be witnesses to climate-change impacts? His Majesty stated that he knew how much trail runners love nature and that they would observe and be in tune with their surroundings. In his mind, trail runners were the perfect messengers for his call to action. 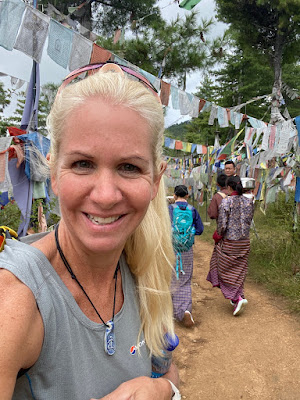 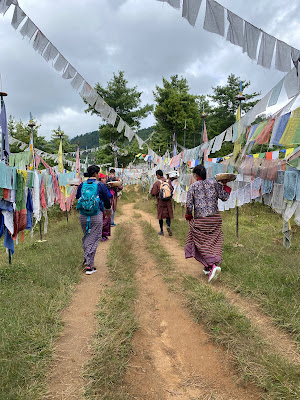 When asked to participate in a 200+km race just 2 months prior to the start doesn’t allow much time for preparation. Either you are already trained for it, or you stay home. For me, it was not an option to decline. This was like a dream come true. The perfect race. And after years of running ultramarathons, my endurance was at the point where on any given day I could go out and run a marathon without thinking twice about it (though not fast). So I knew that the distance would not be a hurdle. My concerns were (1) the terrain: would it be at all runnable? and (2) the altitude: would I be a victim of the dreaded high-altitude sickness? To prepare for the technical terrain, I began incorporating more strength training into my weekly program. Hiking up steep rocky slopes would require strength and balance. And to prepare for the high altitude I rented an altitude-simulation compressor and tent, which I erected over my bed, allowing me to sleep at progressively higher altitudes over the four weeks prior to traveling to Bhutan. Other than that, my good-luck charms would have to suffice. 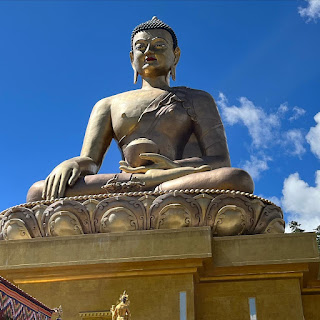 As the inaugural event, there were many unknowns about this race. Logistics, gear, availability of food and clean water, weather conditions, evacuation and health & safety options. And to be quite honest, I wasn’t 100% sure of much of anything as I packed my bags and boarded the plane, not even whether the race organizers would meet me as planned in Bangkok for the flight scheduled to carry the entire group of athletes up over the clouds and into the magical Kingdom of Bhutan.

The week in Bhutan prior to the race went by in a whirlwind. We hiked up to Paro Taktsang, known also as the Tiger’s Nest, and probably the most well-known temple in Bhutan to the outside world. The next day was a visit to the largest Buddha in the world, Great Buddha Dordenma, a magnificent golden deity which resides on a hillside overlooking the capital city of Thimpu. We enjoyed watching men ‘play’ archery, their national pastime, sending off arrows at lightning speed across the length of a football field where the small target was surrounded dangerously close by other competitors keeping an eye on the results. We dined with the former Prime Minister and visionary leader Tshering Tobgay, entertained by traditional music and dancing in costumes inspired by the wildest of fantasies. There were blessings from holy men, offerings to Buddha and candle-lighting ceremonies. We drank tea with roasted rice served in exquisite china cups with the abbot in the holy temple of Gasa Zhong, the political and spiritual center of the region where the race was to start. The Zhong was a magnificent fortification on a hill, where inside the main walls a maze of walkways, stairs, courtyards, small buildings and temples was to be found. 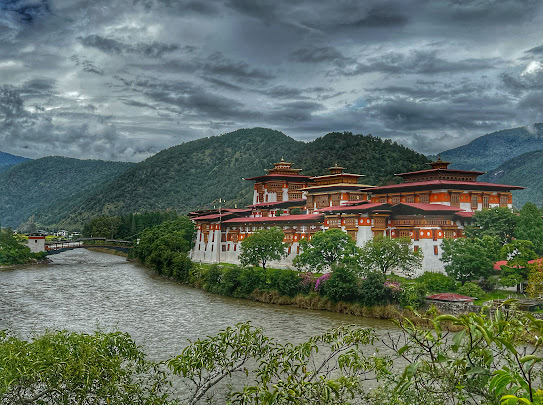 We were treated like rock starts wherever we went. The news of our presence in Bhutan was omnipotent. Everyone knew who we were and we were awarded the royal treatment. Literally. As you’ll find out once you read on.

The race course itself on the first day began with 20 kilometers of forestry road which was easy to run on and fast, since we were still at relatively low elevation. The first river crossing that swept unabashed across the forestry road was running at a high level from recent rains. The current was strong and as I approached I saw no easy place to cross. There was a military officer on the other side who was clearly there to watch out for our safety. I looked at him in desperation, hoping for a tip as to where and how I should best traverse. He made a motion for me to remove my backpack as he began to wade across in his knee-high rubber boots. He took my backpack from me, motioned for me to stay put, then crossed back over the river, placing my pack on the other side. Then he waded across again, turned around and motioned for me to hop up on his back! A piggy-back ride across!

We then entered a valley that was ankle-deep full of mud for many miles. We couldn’t avoid stepping in the muck that was also loaded with horse dung, except to try to jump from rock to rock, tapping the mud with our trekking poles to find firm places to step. Then the trail began to gain altitude quickly. Running was all but impossible. Higher and higher, over passes strung with colorful prayer flags and meticulously-piled stones. It began to get very cold when the sun set around 6 pm, 12 hours since the race start. It began to rain lightly, which eventually turned to snow. The trail markings were difficult to see and I was left with only GPS to navigate the track. After 13.5 hours I finally reached the first night halt, cold and hungry. I was given a quick medical check and my vitals were good. The nurse was surprised to see that my oxygen saturation was 93%, higher than any of the other runners (I guess the tent had worked). I had woken that morning at an elevation of 2200 meters and was going to sleep that night at 4800 meters, a dangerously risky game with the altitude.

I went to my tent, changed into dry clothes and pulled my sleeping bag out of my backpack. Food was brought to me which, despite being hungry, I had to force down. Altitude does crazy things to appetite and digestion. I was still cold for a long time but eventually fell into a light sleep. When I woke at 4 am and packed my bags for the 6 am start I felt pretty good. But I noticed right from the start that I was moving slower than normal, and then at the first climb over the Karchung La pass at 5280 meters, I realized that my pace was very slow, too slow. Although I had no symptoms of high-altitude sickness, at that elevation I simply could not move fast. I was afraid I would not make the subsequent daily cutoffs, which would keep me out on  the trails until late into the night, putting myself (and the organization) at risk. So I had to make the hard choice to return to camp 1 and retire from the race.

Six runners had retired on that first day, several more during the next, and some were even evacuated by rescue helicopters after showing signs of high-altitude sickness. In the end, of the 29 starters, 17 athletes completed the entire race (8 of 20 international starters), including all 9 Bhutanese who also, as expected, took every one of the podium positions. 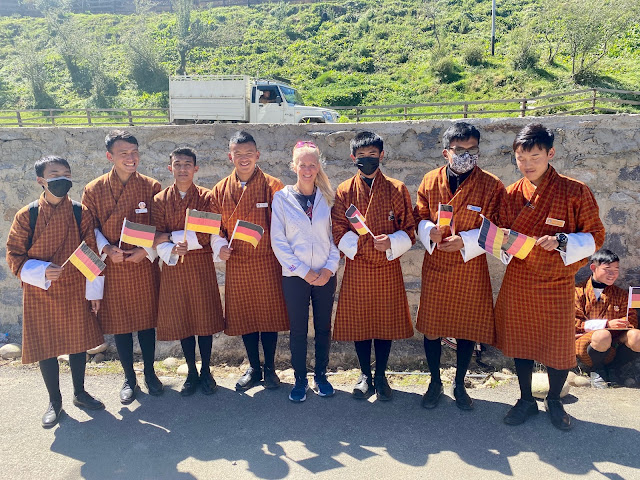 But even as the race was over the fairytale was far from ending as we were subsequently treated to a reception with His Majesty the King and Queen of Bhutan. The finest whisky and wine in crystal goblets as well as hors d'oeuvre of Bhutan’s finest delicacies were being served in abundance. And if that weren’t enough, on the evening before flying back to reality we dined with the Bhutanese Prime Minister Lotay Tshering who distributed certificates to all Snowman Race runners prior to mingling with him and other local and national politicians, including the Foreign Minister Tandi Dorji, as well as military officers and the Race Chairman and organization team. As I was sitting at a table with my tent-mate Sarah, the seat next to her suddenly became occupied and we were both surprised to see it was the Prime Minister himself! We chatted for about 15 minutes over hor d'ourves about the race and his vision for Bhutan's future. As I made the humble suggestion that perhaps some of the tourist dollars could go into supporting the infrastructure such as roads, since we'd just come in from Bumthang and the roadway was treacherous (landslides, sheer drop-offs with no guard rails, missing stretches of asphalt, cows, dogs, etc.) He gave me a smile and said, "The road from Bumthang is the best in our country!" We all laughed.

I went to Bhutan focused on running a race, but I came home as an unofficial ambassador for this small country that stole my heart. It is one of the last untouched natural wonders of the globe, with nature, wildlife and mankind living in harmony as was done for millennia but is not seen anywhere else (or seldom) here on earth today. Their contribution to the climate crisis has been minimal if not insignificant, but they carry the greatest burden. In a bizarre reversal of the economic trickle-down theory, by the time that Western nations feel the devastating impacts of the climate crisis, the countries at the top of the world, like Bhutan, will be no more.

This article was first published on Ask the Monsters (https://www.askthemonsters.com/the-snowman-race-running-on-top-of-the-world-literally/)